STUN Update: Alcohol induced deaths among persons 25 and over increased 2000-2018

A new report published by the Centers for Disease Control and Prevention (CDC) finds that rates for alcohol induced deaths among persons 25 and over increased from 2000 through 2018.

Health care practices in North Carolina face many challenges. Our team of quality improvement coaches (QICs) have skills and expertise to support you in your transformation efforts.

Apply for practice support services - fill out an application here 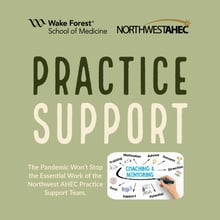 In Case You Missed It... Check Out These Recent Posts